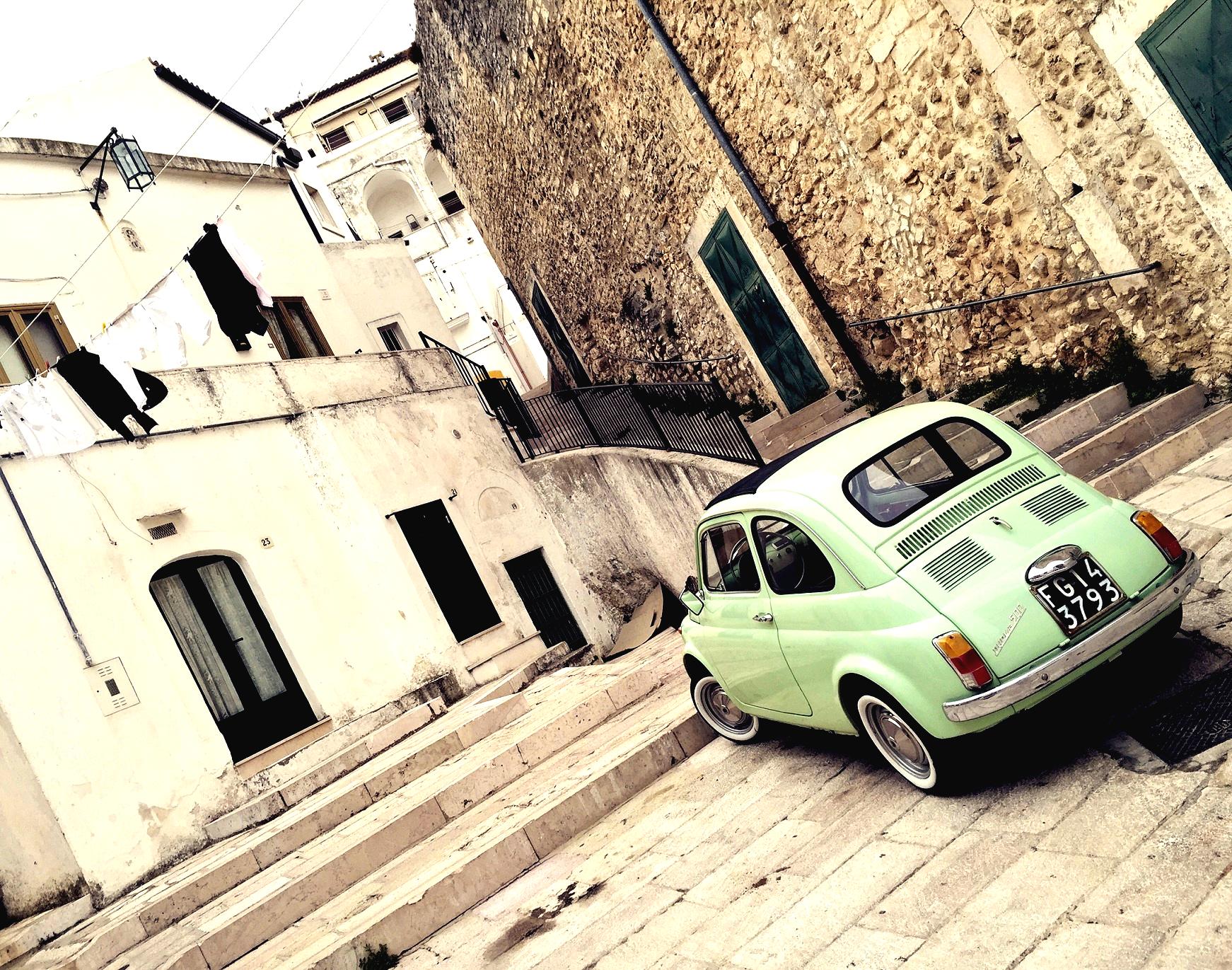 A few people have asked me recently about driving in Sicily, so here’s my collected wisdom for anyone thinking of doing it …

If you’re going to Sicily, you really need a car to see the good bits. Don’t even think about going there and not hiring a car. Seriously.

Arrange your car hire before you leave with a reputable company, not a local one. I’ve used Auto Europe several times and they’ve always been good. You can book all your extra insurance through them so there’s nothing to pay (or negotiate in Italian) at the counter. If you have a problem with them you go through to an English-speaking operator (apparently – I’ve never had to call)

Choose the smallest car you can get away with but one where all your luggage will fit in the boot.

You need a small car because of the scarcity of parking and the narrowness of some of the streets, but you don’t want to leave any luggage visible in the car, ever.

For two of us with a medium size bag each, a Fiat 500L works well. If we could downsize our luggage to just carry-on, then I’d go for a Fiat 500.

Picking up & dropping off your car

I strongly recommend hiring and returning your car from the airport. You’ll probably arrive / depart from either Palermo and Catania and you really don’t want to drive in either of those places unless you’re really used to driving in Italy. From both airports you’ll be onto a motorway quick smart, and have a lovely calm start/finish to your holiday.

You don’t need a car in either Palermo or Catania so save your nearby daytrips until you do have one, and enjoy these cities on foot.

So even if your first port of call is Palermo, when it comes time to get your car, go back out to the airport to get it. The 50 or so Euro you spend on the transfer will be well worth it.

Who will drive and who will navigate?

With Mr Pantaloni and myself this is an easy decision. He’s a terrible navigator so I navigate and he drives. Plus his Italianness really comes out on the roads, and that’s extremely helpful in Sicily.

The driver needs to be able to drive a manual, be confident and reasonably assertive (read aggressive) on the road. Patience also helps.

If you have to do everything yourself, then good luck to you!

I have a three-fold system for navigating which works really well for me.

I take my own GPS which already has the Italian maps pre-loaded. This is a lot cheaper than renting a GPS, plus I’m already familiar with the way it works.

In addition to a GPS I have the Pocket Earth app on my iPhone. Pocket Earth is great both in the car and while walking/sightseeing. You download the maps you want before you leave (I do every town I think I might want to go to) and then they’re offline while you’re in Sicily so you’re not using your data. Plus, you can pre-mark all the attractions you want to see (really handy when you’re walking), and it knows where you are so you can find your way.

Too much, you say? In Southern Italy, I think not. Anyway, hear me out.

I use the old-school map to get an overview of the area – you need to know which direction you’re headed (and where you’re not) to take the right exits. And to check up on the GPS in case it leads us astray …

Then I switch to Pocket Earth (while still keeping an eye on the GPS) to navigate my way to the best parking area / not go too far into the town. More on this later in parking tips.

Be confident and just go for it! If you wait for someone to let you in, you’ll be waiting a long time.

Speed signs are an indication rather than a rule. We’ve been passed by the police while speeding and they don’t even look twice at you. If, however, you happen to see the electronic speed cameras take notice of them – the fines are hefty!

Motorists will stop to have a chat to pedestrians or other motorists and this is seen as extremely reasonable behaviour in Sicily, so just wait and be patient. Remember Italians love to talk!

Sicily has some really great motorways for when you need to travel long distances quickly, so use them.

Use google maps to decide your route, as the shortest route in distance may turn out to be the longest time-wise.

Many parts of Sicily are unattractive to look at so you won’t be missing out on anything if you take the motorway to your next destination.

There are only a few toll roads in Sicily and they’re worth it, so use them. There are lanes for both cards and cash to pay. Just don’t go in the e-tag lanes. Sometimes the booths are staffed but often they’re not. Don’t worry they’re easy to use, and give change.

I tend to keep a small coin purse in the glovebox to pay tolls and parking meters.

Sometimes you might see a person standing outside the toll booth offering to help you pay (one even told us the machine was broken – it wasn’t). These guys are kind of like the parking mafia (see below) and are harmless (in my experience). We just ignore them.

As with the rest of Italy, any spot you can squeeze your car into is fair game, even if that means your car is sideways or sticking its bum out at a strange angle.

You’ll find meters in some places and in others you’ll need to use various forms of parking tickets (both paid and unpaid) that you can get / buy at the nearest tobacconist store. Instructions for these vary but usually it’s the dial style which you set yourself with the time you arrived and leave on the dash.

In Sicily you will be approached by the parking Mafia who will try to wave you into a spot you’ve already found for yourself and then offer to ‘look after it’ for you for a small fee. We just ignore them and walk off, but we’ve seen people (usually locals) actually hand over their car keys! It’s up to you whether you pay them, but remember they are part of the mafia, albeit on the bottom rung. You’ll even find them in the carparks of major tourist attractions, with officials turning a blind eye.

My tip for parking in towns is to find a park just outside the old city and walk in from there. This strategy has saved us a lot of grief over the years, and is probably the reason why we’re still married. I take a photo of where we’ve parked and also mark it on Pocket Earth so we can find our way back. Trust me, you do not want to drive in the old city centre. Our stupid GPS once tried to send us down a set of stairs at the end of a laneway that diminished in width at an alarming rate. Practice reversing is all I can say.

Always check with your host / hotel where the parking for your accommodation is. Italians have a fairly loose definition of ‘parking included’. That could mean take your chances in the piazza two blocks away that you can only park in during certain hours, if you can find a space.

Stopping off for a picnic along the way

This really surprised me, but I don’t think we found one picnic area for motorists in the whole of Sicily. It’s really terrible, and they should do something about this. So forget packing a lovely picnic to have along the way. Instead, stop off at a town and have a lovely lunch in a trattoria instead.

Although I’ve written this for Sicily, a lot of it still applies for anywhere in Southern Italy.

Until next time, happy travels (and happy driving!),